I’m doing what I said I would never do. Rewrite my book. I completed my manuscript late last year, sent it out to 20 small presses and one agent. While I have been waiting for the results to trickle in—those returned so far have been rejections—I’ve been troubled by a lingering discomfort that I have left something out. Something significant. Something that I couldn’t, shouldn’t ignore.

So for the past few months I have been having an internal dialogue:

“Leave the book alone. You did the best you could do.”

“No, something isn’t quite right. I’m not happy with the final manuscript.”

“You could be rewriting this book for the rest of your life. Let it go. You don’t want to be that writer who never submits her book because it ‘isn’t good enough’.”

“Aha! I know what it is that’s troubling me.”

Why is this important? Well, because when I became a Gerontological NP in the early 80s, studying old folks was a rarity. Older persons were generally ignored or worse, discounted and ill-treated. The 1978 best seller House of God by Samuel Shem, an irreverent book about medical interns in an renowned teaching hospital first coined the derogatory term GOMER, meaning “get out of my emergency room.” A term used frequently to classify the old person as someone without worth to cure, much less treat in our medical facilities. Some believed most old folks disengaged from life, deriving no pleasure in longevity. The fact that elders over 60 would still be interested in sex was shocking. 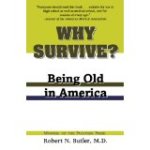 And in this same time period the groundbreaking book: Why Survive? Being Old in America by Robert N. Butler, M.D. discussed whether or not to introduce geriatrics in postgraduate medical education.

Nursing was early to recognize geriatrics as a specialty but thought that the medical definition—specializing in the treatment of existing disease in older adults—too narrow.

Nursing developed a much broader vision and used the term gerontology rather than geriatrics.

In 1981, the American Nursing Association certified me as a Gerontological Nurse Practitioner. A Board Certification was developed by the Medical Community 7 years later.

After I rewrite my book, you will see a Gerontological Nurse Practitioner in action.

After a long career in nursing--I was one of the first certified gerontological nurse practitioners--I am now a writer. My writings center around patients I have had over the years that continue to haunt my memory unless I record their stories. In addition, showing what a nurse practitioner does in her job will educate the public about we nurses really do. So few nurses write about ourselves as compared to physicians. My memoir, "Stories from the Tenth Floor Clinic: A Nurse Practitioner Remembers" is available where ever books are sold View all posts by Marianna Crane

3 thoughts on “Rewriting the Book”