I have been thinking for a long time about the fact that we older nurses are dying off. We will take with us our memories of nursing history. I have always loved to hear from other seasoned nurses about how they size up their nursing careers as they look back. What was important at the time, what were they happy to see disappear, and how do they assess current nursing practice and the future of the profession?

So I decided I would weigh in, occasionally, by spotlighting a nurse of a certain age, i.e., sixty and older, whether this is through an article I have read or by interviewing someone, or through my own stories.

This post is prompted by an article: Diane Saulecke, “There from the Start: A Hospice Nurse Looks Back,” American Journal of Nursing, 7, July 2017, 56-57. 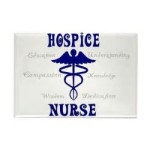 The article features Dianne Puzycki, an 82-year-old nurse, who began to work with the hospice movement when it first started in the early 70s. She still works “the night shift at Connecticut Hospice once a week. ‘I want to be part of it as long as I can,’ she says, ‘It’s become part of my life, my philosophy.’”

After graduating from nursing school in 1955, she started her career at Memorial Hospital (now part of Memorial Sloan Kettering Cancer Center) in New York City. There she cared for patients with cancer, many of them young women.

“At that time, we didn’t talk about death and dying,” she says. “We weren’t allowed to talk about that. It really haunted me for years.”

I remember those restrictions well. The diagnosis of breast cancer was withheld from my beloved Aunt Lena. I was in the first year of nursing school but never visited her in the hospital. One evening, when I was talking to my mother on the phone, I asked, “How is Aunt Lena?” “Just fine,” my mother said. That’s when I knew she had died. My mother would give me the bad new when I next went home to visit.

Puzycki mentions that she heard both Cicely Saunders, a doctor who founded the first hospice, and Elisabeth Kübler-Ross, who opened up discussion on dying through her 1969 book On Death and Dying. The early 70s were heady times in health care as discussion heated up regarding the previous taboo of being honest with patients by telling them their cancer diagnosis.

Kübler-Ross’ book was the subject of a workshop for the medical staff at the time I worked for a community hospital in the early 80s. To this day I remember one of the surgeons storming out of the classroom after loudly protesting, “my patients don’t want to hear that they have cancer.”

Being present for patients and “picking up on the little things” is to Puzycki the key to hospice nursing. And she says that seeing the compassionate actions taken by her colleagues, especially the younger ones, makes her feel hopeful about the future of the profession. She recently saw, for example, a fellow nurse lean down and kiss an elderly patient on the head. “I said, ‘That’s a good hospice nurse.’”